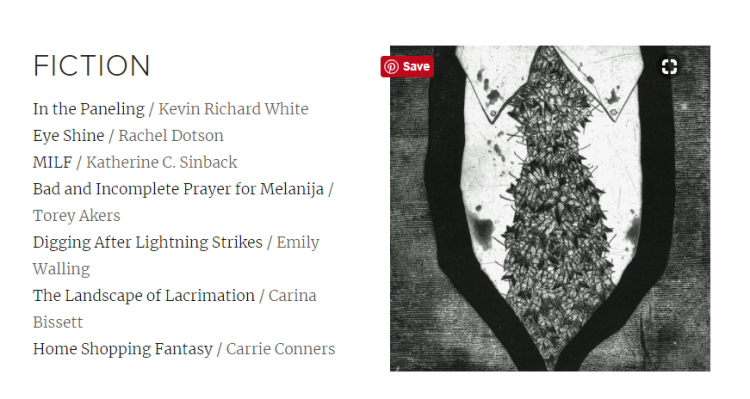 I’ve had several pieces published recently, so I figured it was time to share the news. Today, my story “The Landscape of Lacrimation” came out at The Hunger. It’s a strange swirly tale written as an experimental piece. I often feel as though I don’t quite fit in, and I wanted to attempt to recreate that feeling in this story. The lyricism is over the top, and it’s written in second person. Both of these things are meant to keep the reading left feeling a little unmoored. It also contains dozens of slur words, which I’ve used outside of context, another technique meant to increase the sense of unease. As you might imagine, it’s not easy to place a story meant to make the reader uncomfortable, so I’m especially pleased that the editors at The Hunger took a chance on it.

The publication of Hath No Fury, which features my weird, futuristic mash-up of “Jack and the Beanstalk” and Nathaniel Hawthorne’s “Rappaccini Daughter,” has been pushed back again. It’s now listed with a July release date. However, I have seen the epub of the anthology and it’s a thing of beauty. Worth the wait, I promise.

Another piece scheduled to come out soon is my poem “C8 : A Tessellation of Faces, Wings, and other Obscure Things,” which will be featured in Alphanumeric, the online portion of the NonBinary Review Issue 17: A Wrinkle in Time.  I also have a poem, “The Savory Taste of Temptation,” in The Necro-Om-Nom-Nom-Icon, which was released in April. My contribution to this Lovecraftian-inspired collection came in the form of an amuse-bouche.

I have several other stories and poems currently out on submission, so I hope I will have more good news to share soon. In the meantime, I’m working on the final stages of my thesis, a short story collection titled The Anatomy of Melancholy.  Graduation is right around the corner, and I should have my MFA in hand July 16th. Stay tuned!

One thought on “Publication News”