Butterflies have always fascinated me, which is just one of the reasons I wrote this article for a regional magazine years ago. With “puddle parties” right around the corner, I decided to share this piece on the legends and myths found in the Southwest. Enjoy! 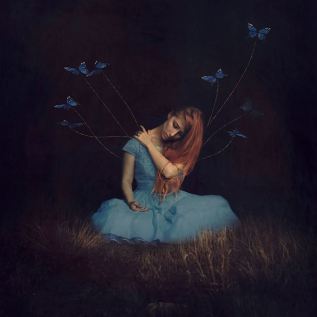 One bright summer day, the Creator sat under a tree watching a group of laughing children at play. A brown pup romped through a riot of wildflowers. The sun lit a bright blue sky dotted with wispy, white clouds. A songbird landed in the branches overhead, loosing a shower of pine needles.

The Creator watched the play of shadow and sunlight and fallen yellow leaves fluttering here and there in the late summer breeze and as he watched these things he grew sad.

“Soon these children will grow old,” he thought. “And that puppy will become a tired, mangy dog. And the flowers will die and snow will cover the land.”

The Creator became so sad at these thoughts that he vowed to preserve the afternoon for the months ahead. “All these colors should be caught forever,” he said to the songbird that watched him overhead. “I will make something to gladden my heart, something for these children to enjoy.”

He took out his magic bag and in it he put the black from a laughing girl’s hair, the brown of the pup’s floppy ears, the yellow of the fluttering leaves, a bit of blue sky and a touch of white from a cloud passing by. He added green from the pine tree and the orange, purple and red from the flowers all around. Overhead, the songbird sang her merry tune and with a smile, the Creator tossed a bit of her melody into the mix. 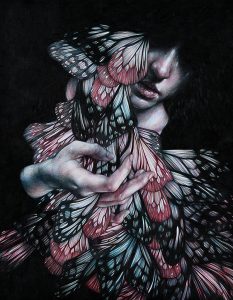 Brimming with happiness, he walked to the children and offered them the bulging sack. The beautiful girl with black hair opened the magic bag and out flew thousands and thousands of butterflies in every color ever created. Enchanted, the girl said she had never seen anything so beautiful. The children agreed and the Creator was glad.

And the children danced with joy under the fluttering wings of these new, fanciful creatures. Then one, with wings the color of a summer sky, landed on the Creator’s head and began to sing a beautiful song. The other butterflies joined in and the children stopped to listen to the chirping melody.

The songbird flew down to perch on the Creator’s shoulder. “When you created the birds you gave us each our own song. Now you have passed mine around to these new playthings of yours,” she scolded. “Isn’t it enough that they have all of the colors of the rainbow?”

The Creator thought a moment and said, “You are right. I should not have taken what was yours.”

And he took away the song from the butterflies, which continued to dance over the children’s heads.

“The are beautiful even so,” the Creator said.

And that is why butterflies are silent today.

This delightful Papago version of the creation of butterflies is only one of a fluttering myriad of butterfly tales told throughout the Southwest and far beyond. The butterfly has symbolized the human soul since antiquity. The Russian name for these colorful creatures is babochka and the Ancient Greeks called them psyche – both words for the soul. The common name of the butterfly comes from the Anglo Saxon word buterfleoge for “butter” and “flying creature,” which linguists believe was the way of identifying Europe’s common yellow brimstone butterfly. 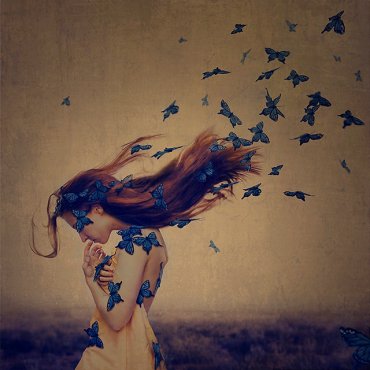 Of course, butterflies actually flitted onto the scene long before people started making up myths to account for them. Butterflies emerged at least 38 million years ago with the earliest known fossil discovered in Colorado’s Green River Shale. Today, there are nearly 18,500 known species of butterflies ranging in size from Queen Alexandria’s Birdwing with a wingspan of 11 inches to the diminutive Western Pygmy, which spreads out to less than half an inch. Butterflies can be found on nearly every part of the globe with the exception of Antarctica and the world’s oceans. They grace flowery fields, meadows, hillsides, stream banks, forest glades, deserts and alpine tundra. They play a crucial role in the ecosystem as pollinators and in the human imagination as symbols of creativity, joy and rebirth.

Nearly 400 species of butterflies – more than half of the total number found in the entire North American continent live in Arizona. The Tohono O’odham, once known as the Papago, focused on the sheer beauty of these insects, as some 240 species flutter through their southern Arizona homeland. The southeastern portion of the state has biological links to the Sierra Madre range and the tropics in Mexico and its varied plantlife and climate account for the region’s diverse butterfly population.

The Yaqui, another southwestern desert tribe, believe that butterflies portend the coming of rain. When they spot approaching butterflies, the Yaqui sing a rain song and throw white corn kernels or dried leaves in the air. 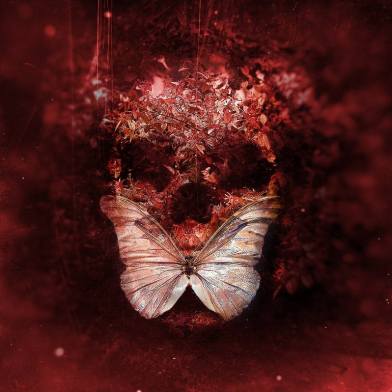 White butterflies, they say,in a row are flying.

Over there, I, where the flower-covered sun comes out,

they are emerging, all through the wilderness world,

in a row they are flying.

As this song would suggest, the best time to search out butterflies in the Southwest is in the rainy season between the months of July in September, which is when the adults are breeding and laying their eggs. The highest concentration of species in Arizona reside in the southeastern portion of the state – specifically in Santa Cruz, Cochise and Pima counties. Chances of finding butterflies increases when two habitats overlap. Some of the best, easily accessible butterfly watching areas include Sabino Canyon in the Santa Catalina Mountains, Madera and Florida Canyons in the Santa Rita Mountains, and Ramsey and Garden Canyons in the diverse Huachuca Mountain range. Along with discovering them near their favorite flowers, butterflies might also be found congregating in “puddle parties,” depressed wet spots where the insects gather to replace vital trace elements.

But you don’t have to venture south — butterflies and their stories can be found throughout the Southwest. In eastern Arizona, the Chemehuevi, also known as the Southern Paiute, often represent insects in the designs of their highly prized baskets. The popular pattern of the butterfly shows up in these coiled baskets, which are woven out of such raw materials as willow, devil’s claw and juncus. 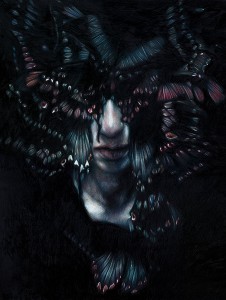 Like many ancient Southwestern cultures, the Hopi often utilize the symbolism of butterflies. Prehistoric Hopi pottery shows this affinity as does the three Hopi kachina with butterfly origins — Poli Sio Hemis Kachina (Zuni Hemis Butterfly Kachina), Poli Taka (Butterfly Man) and Poli Mana (Butterfly Girl). However, the butterfly assumed a more menacing aspect to the Aztecs in Mexico. The goddess Itzpapálotl, or Obsidian Butterfly, was represented as a strong ferocious goddess with butterfly wings and big claws on her hands and feet. In Mexico, many people still believe that a black butterfly at the door portends an impending death.

Several Arizona-based cultures drew similar, disquieting morals from the butterflies fluttering, zigzag, seemingly demented flight. The Zuni sacred butterfly, lahacoma, is believed to make people crazy, especially young girls who will follow the yellow butterfly wherever it may lead. This belief is similar to the story of the Apache Bear Dance, in which butterflies entice girls from the underworld. The Tewa of Arizona also warn against the temptation represented by this colorful insect in “Transforming Bath: Butterfly Seducer” — a tale where a girl ignores her work to follow a beautiful butterfly up a mountain. Once at the top, the butterfly turns into a wicked boy who then tosses the girl down to her death.

The Navajo use the symbolism of butterflies to warn against vanity, temptation and foolishness. The Navajo story of “The Two Maidens and the White Butterfly” furthers the folly of butterflies. When the hero of the tale catches the wicked White Butterfly, he splits open the enemy’s head with an ax and thousands of butterflies escape from the mortal wound. The wise hero pulls one of the butterflies out of the air and insists that it tell the others they can no longer enter the brain of man. “You will be of little use to the people,” he says. “Only when they catch you and put pollen on their legs and arms and say – ‘May I run swiftly, may my days be long, may I be strong in arm.’” Even so, the Navajo consider the perishable dust of the butterflies’ wings a subtle warning on the fragility of beauty.

In the spring, the Apache sing the sorrowful song of the Flower Maiden, which also details the creation of the butterfly: 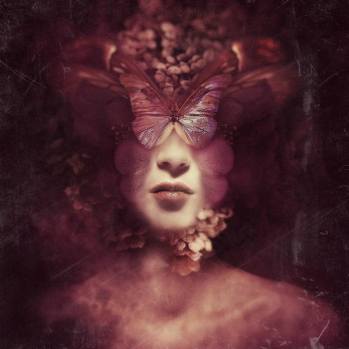 In the first days of the people, many warriors sought the favor of the beautiful Flower Maiden. But of them all, she loved only two – Hidden Love and Iron Courage. They each contended for her love, but not even the Sky Father could help her make the choice. Then fate stepped in and both warriors were called to a great battle against invaders coming from the north. Flower Maiden bid them each good-bye with a heavy heart. Many months passed as she waited for her warriors to return, but when the war party rode back into camp, neither of her loved ones returned with the victorious.

Flower Maiden, who had lost any chance of happiness, took her tears and set out to find the bodies of the warriors she still loved even in death. She searched the hills and plains for years, sundered from herself in her grief.  When she could find neither of her beloved warriors, she pleaded with the Sky Father. “Please help me find their resting place,” she cried. “Please help me find their lost souls.”

“It was not my wish that your promised ones should die,” said the Sky Father. “But with them I also touched many others and in sorrow, I covered all of their bloodied bodies with soil and grass.”

The Flower Maiden lamented. “Then I shall never find them.”

Her sorrow grieved the Sky Father so, he ordered the ground to yield flowers in the colors and patterns of each fallen warrior’s shield to aid Flower Maiden in her lonely search. And when he realized she could not find the battlefield on which her beloved warriors had died in a single lifetime, he turned her into a beautiful butterfly so that each spring her spirit could wander among the flowers in search of her loved ones. And perhaps one day she will find them.

In the meantime, the Creator has given us the butterflies — ephemeral as the powdered memory of love lost, the black from a laughing girl’s hair, the yellow of falling leaves or the halcyon blue of a summer sky. 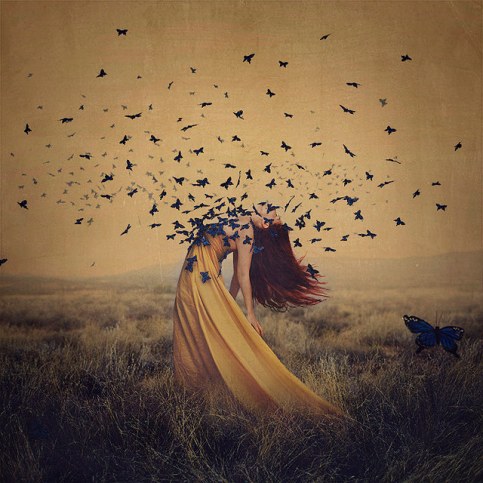 2 thoughts on “Legends & Myths: Immortality in a Butterfly’s Wing”