My preference for weird and dark fiction is something that is often reflected in my writing. This wasn’t always the case.

When I was growing up, I tended towards fantasy. I would occasionally dip into murkier water, but the books in the horror section were most often written by men and that flavor of the macabre didn’t suit my tastes. The fantasy I penned often examined the dark places in the soul and I wished there were other women writing in the same vein.

Over the years, I’ve been pleased to see more and more weird and dark fiction being produced and published by women. However, we are still a minority among writers working in a male-dominated genre.

There have been efforts in increasing the visibility of women writers of horror. In fact, the whole month of February (the shortest month of the year) is dedicated to spreading the word about women writing weird and dark fiction. During Women in Horror Month, lists of fabulous female horror writers are bandied about. The Horror Writers Association has even taken a stab at cultivating women writers in the field with the $2,500 Mary Shelley Scholarship (the first scholarships were awarded in 2014).

It’s wonderful that the efforts are bringing women horror writers new readers, but what happens when February comes to an end? What happens to the visibility of the fabulous female writers working in the field the rest of the year? For the most part, we disappear. 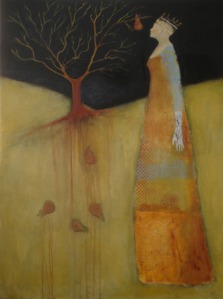 “Do we vanish from your minds the rest of the year?” writes Damien Angelica Walters. “I understand compiling lists and such, but is this the only time you pay attention to the women writing horror? If that’s the case, I’d ask you to ask yourself why. If your current reading lists or end of the year lists contain little or no work written by women or you typically don’t read horror by women, why? Yes, please read our work and talk about it in February, but please also read our work and talk about it the other eleven months of the year.”

These are questions that need to be broached. It’s a complicated business, but I have hope that women who are writing horror will continue to make their presence known. And that presence will grow.

Here are a few suggested reads (ranging from horror to dark fantasy) to whet your appetite:

Palingenesis by Megan Arkenberg
All the World When It Is Thin by Kristi DeMeester
The Maiden Thief by Melissa Marr
eyes I dare not meet in dreams by Sunny Moraine
It Feels Better Biting Down by Livia Llewellyn
Stopping by Woods by Lise Quintana
Fabulous Beasts by Priya Sharma
Armless Maidens of the American West by Genevieve Valentine
Sing Me Your Scars by Damien Angelica Walters
Even In This Skin by A.C. Wise
Hungry Daughters of Starving Mothers by Alyssa Wong
Secondhand Bodies by JY Yang